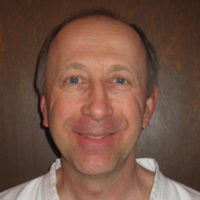 Dave Kuntz began Shotokan Karate practice in 1980 with Sandan Tom Cordaro, the founder of Albuquerque’s SKA dojo (Shotokan Karate of America’s New Mexico dojo). David stepped up to lead the dojo in 2007, along with the continuing assistance from Ed Piekos. Both David and Ed are Shodan, first-degree black belts under Mr. Tsutomu Ohshima.

Dave earned the rank of Shodan in 1991. He has attended seven special trainings.

Ed began training in Boston at the MIT Shotokan (SKA) dojo in 1993. He relocated to Albuquerque and began training here in 2000, earning his Shodan in 2002. He has attended two special trainings.

Christine Lynch, a founding member of Foothill Shotokan Dojo (SKA) in Norther California, came to Albuquerque  in 2016 and now serves as a visiting assistant instructor. Christine began her training in SKA in 1984. She has attended 26 special trainings and earned the rank of Nidan, second-degree black belt, in 1996 under Mr. Ohshima.